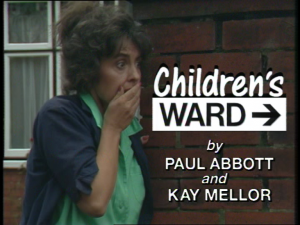 What would ITV do now to have shows in the same week written by Paul Abbott, Kay Mellor and Steven Moffat? That happened for the first few weeks of Children’s Ward’s run (Press Gang Mondays, Children’s Ward Wednesdays). Welcoming an Ofcom review of children’s programming, Mark Wright at Television Today argued that, despite there being numerous digital channels for children, there aren’t many “original, home grown shows that nurture not only young and upcoming talent, but bring new audiences” to television rather than encouraging kids to “sod off to the Internet”.1 As Wright notes, many of Children’s Ward’s alumni are now “among the premier drama writers in the country”: Abbott, Mellor and (from later seasons) Russell T. Davies, Matt Jones, and Sally Wainwright.

I watched Children’s Ward and Press Gang from the start, though I was more passionate about Press Gang’s His Girl Friday/Moonlighting wit and complexity, and now Children’s Ward tends to be less highly regarded. Others champion Byker (Byker! Byker!) Grove: the Guinness Book of Classic British TV (one of whose writers, Paul Cornell, soon wrote for Children’s Ward) qualifies its positive statement about Children’s Ward by saying that the CBBC show handled issues more “boldly”.2 (I don’t know, we were a CITV house – in itself an archaic statement.) The hospital setting obviously isn’t new – that tidy pretext for social microcosms has dominated TV for decades. The children’s ward setting isn’t new either: in The Hill and Beyond, Alistair McGown and Mark Docherty discuss ATV’s Why Can’t I Go Home? (script-edited by David Fisher) from 1979. Unlike that earlier series, Children’s Ward was a long-running success (ending in 2000).3

Although I’ve rewatched Press Gang many times over two decades, I’d never revisited Children’s Ward, and it’s been a pleasure. Written entirely by Paul Abbott and Kay Mellor (and directed on videotape, mostly in the studio but with a couple of key location sequences, by Nicholas Mallett, Alistair Clark and producer Rod Natkiel), the first season is quality soap opera, in terms of storylining and writing, as you’d expect from writers with their pedigree then (especially on Coronation Street) and since. 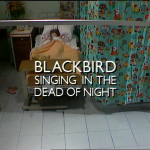 The DVD includes what is in effect the pilot, ‘Blackbird Singing in the Dead of Night’, Abbott and Mellor’s 1988 play for Dramarama (a single play anthology on Children’s ITV), directed by Spencer Campbell. It introduces some of the series’ central elements (a central boy/girl relationship, a male nurse/female doctor partnership, an overeating boy, constant radio and a girl having trauma flashbacks) though its characters are different and it’s a lovely play on its own terms. Kim, a girl whose hearing was damaged in an explosion, is frustrated by constant readmissions for treatment that doesn’t work, and snaps at staff or clams up, but we’re privy to her thoughts through voice-overs, a subjective device (not used in the series) pushing the child’s perspective. She opens up to Danny, who was also initially aggressive, and as the ending makes clear, her injury works within the play’s metaphorical approach to childhood by flagging up ideas of talking and listening.

That Children’s Ward will be less reflective is clear from Episode 1’s jolting pre-credits location sequence in which 13-year-old Fiona (Rebecca Sowden, i.e. Callard) runs into the road after arguing with her mother about seeing an Iron Maiden concert, and becomes the victim of a hit-and-run driver. She’s rushed to our location, South Park General Hospital. (When that name stops bringing to mind a different TV series, in a later episode a child is taken to Springfield House.) Fiona spends much of the season in a coma, overseen by her mother. In the ward, our focal points are older than in the pilot: troubled 15-year-olds Keely (Jenny Luckraft) and Billy (Tim Vincent), whose dialogue (the odd “dickhead”, “knobhead” or “slag”) is sometimes choice for the timeslot.

But as in the play, the series mixes children of different ages and backgrounds, including over-eating Ben (who’s posh enough to talk of “nosh and pop”, though sadly doesn’t say “Slurp! Sloo!”), the demanding Dawn and amiable gunshot victim Alex. The tone can switch from relatively bleak (some children can’t be cured) to fun for younger viewers, as the kids gang up on tyrannical confectioner Jack (“WHO’S AGGRESSIVE?!”), who has “seen borstals run better than this”. Like Danny in the pilot, Billy wanted to be on an adult ward, and it’s tempting to think the show wants to defuse the oft-noted concern that many children dislike watching younger children. But EastEnders always features high up the lists of programmes most watched by children, and Children’s Ward respects that.

There’s also a strong focus on staff, their tangled personal relationships (albeit on a teenage-drama “dating” level) and professional lives, with scenes devoted to discussing cases, protocol and administration. Though they’re all dedicated, they make mistakes and show temper, especially with misbehaving kids whom Dave sometimes “could actually throttle”. The show credits several medical advisors, plus the Paediatric Unit of Bolton General Hospital, its real-life setting. There’s the politics of involving a psychiatrist (the admirably doomy Dr Yin) or social worker (Steve), and lots of useful advice: it’s not just sickly kids who get asthma, it’s not just tramps who are alcoholics, epilepsy is like letters misdelivered by the Post Office, the big problem with asthma isn’t breathing in but breathing out, and caravans have VCRs too.

Admittedly the gear changes are a bit creaky early on: the surprise that a woman can be a doctor (Dave not having seen the pilot), a new male nurse’s mistakes are entertaining but strain credulity, the dialogue doesn’t always sing and there’s lots of the soap device of an argument followed by an apology in the next scene or “about last night” as recap-device in the next episode. My biggest fear was Episode 8 but it was better than I’d remembered: the long-threatened visit of DJ Bruno Brookes to try to get a listener out of a coma (haven’t thought that through) generates so much hysteria you’d swear his agent wrote the script, but it also prompts sardonic details such as a never-before-seen administrator hogging publicity and steering a journalist away from the coma victim’s less photogenic friends, and the fact that he first meets the indomitable Mags (Rita Mays), who has no idea who he is. Joking aside, Bruno Brookes (the show only allows his full name) is a sport and also helps continuity with vocal appearances in other episodes. (Celebs visiting in later seasons include Mark Radcliffe and Robbie Fowler.) The ward’s ever-present radio has Ross King (“Ross the Boss – adios”) presenting a commercial-radio soundtrack for 1989, from Wet Wet Wet, S’Express and the Proclaimers to Morrissey’s Last of the Famous International Playboys and Chris de Burgh. Only when there’s a tape deck do we get the more representative sounds of, er, The Chicken Song.

Children’s Ward soon settles into its own rhythm as a compulsive soap opera, packed with continuing storylines, threads to resolve, dramatic conflict and some potent cliffhanger endings (recapped at the start of episodes like Neighbours): Fiona struggles for life; a mysterious zombie-like child is dumped at the ward; a character yields to their addiction; the coma victim briefly (and creepily) opens her eyes, unnoticed; a big confrontation reveals home truths. The last four episodes are particularly strong, with powerful confrontations and a late plot twist.

As I’ve said, Keely and Billy are central to the season (Keely would stay in the show for nine seasons). Both are in the ward for injuries (Billy’s leg, Keely’s tattoo poisoning) but more serious problems emerge. Both have clearly built protective shells: Keely’s bubbliness and makeovers and Billy’s bullying aggression. They’re gradually revealed as vulnerable people deflecting help. Medical emergencies arise organically out of, and shed light on, character, as opposed to later seasons which (according to McGown and Docherty) “tended towards the kind of contrived melodramatic incidents favoured by Casualty”.4 External, physical injuries reveal psychological issues, and diagnosing and treating those often involves getting families to confront their home lives.

It’s more complex than parents being feckless or neglectful: a doting mother faces her over-protectiveness (indeed, Fiona recovers when her mother is absent), separated parents who provide material comforts realise they haven’t had time to listen, and another loving parent just didn’t realise how hurt their child was by the parent’s own, largely hidden, unhappiness. Communication is the answer, as one child says after attending the psychiatric unit: “we never talk like that at home […] you’re not used to being asked how you really feel”. Even the comedic battles between the children and Jack are relevant, as he expects theft from the kids because they’re from a particular area, but Dr Wood – herself from the same area – angrily confronts his prejudices. Judging by appearances is not the way to make a diagnosis at South Park.

Abbott and Mellor’s subsequent profiles might prompt auteurist critics to dig for autobiographical elements they didn’t observe in 1989. Bits crop up in their later work, from bits of background that resemble Abbott’s Shameless to the anorexia and dieting elements that foreshadow Mellor’s Fat Friends. But autobiography could take us into dark places here. Billy broke his leg while drunk, because (though this turns out to be a lie) he fell off a roof at a party; meanwhile, Fiona is hit by a car. Abbott jumped off a roof when he was 13, for more harrowing reasons documented in sources including a profile of the writer in the Telegraph,5 and covered the truth with a different story (which involved being hit by a car). But it’s reductive to simply attribute storylines to writers’ backgrounds or work out which one of Abbott and Mellor wrote which storyline – instead, let’s say that Children’s Ward is at its best when the stories of different characters overlap or collide: when that happens with Billy and Keely late in the season (for reasons I won’t spoiler), Children’s Ward is at its compelling best.

Originally posted: 31 July 2012.
[This piece first appeared on the website Tachyon TV in July 2011. It is reproduced here with minor revisions, endnotes and fewer jokes.]