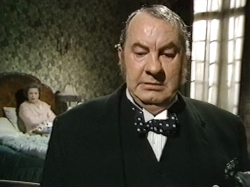 Within a few minutes of the original Play for Today, first broadcast on 16 December 1975, we were introduced to some trademark Rumpole quirks and foibles. He quotes at length his favourite poet, Wordsworth, from Quiller-Couch’s Book of English Verse, refers to his wife, Hilda (Joyce Heron), as “She Who Must Be Obeyed” and wistfully recalls, as he will do so often in the years to come, his triumph as a young barrister in the Penge Bungalow Murders case.

Rumpole, unlike John Mortimer who was a QC, never took silk. He never prosecutes and often takes on (and wins) apparently lost causes, when everything is against him from overwhelming evidence favouring the prosecution to quixotic judges who take a dim view of the barrister’s irreverent and down-at-heel charm.

Mortimer saw him as “As crumpled fellow…always recovering from hangovers,” and “an Old Bailey hack,”2 which is also the way he was described in a review by Times theatre critic Leonard Buckley.3 The Play for Today story involves a stabbing at a bus-stop after an MCC-West Indies match at Lord’s. Rumpole is on a sticky wicket because the police have a confession from the teenage Jamaican boy he is defending, Ossie Gladstone (Herbert Norville). Gladstone is superficially impudent and full of himself; he is, in more recent parlance, “largeing it” about going to the Old Bailey’s number one court “where big cases go”.

There are some interesting details in the handling of Gladstone’s race. When the youth is put in a cell already occupied by two old lags, one of them says: “Stealin’ off de melon patch?” A prison officer refers to Gladstone as a “picaninny” so casually that we are almost being tempted to see it as a Pavlovian response to a black skin, rather than a genuine desire to cause offence. But Mortimer is challenging these attitudes. Rumpole throws a barely perceptible glance at the officer which shows us that he is offended, as we should be. And this is confirmed by a voiceover in which we hear Rumpole repeat a thought he had expressed earlier in the play: “The Old Bailey blunts the sensitivity”. Rumpole is not letting the officer off the hook; quite the reverse, he shows us that this man is so insensitive, and his racism so deep-rooted, that he is prepared to racially abuse a black youth in front of his own barrister.

It isn’t always easy to interpret correctly a writer’s sociological standpoint when examining a work of fiction which is more than a generation old. Playwrights were increasingly willing in the 1970s to address issues of race in stage and television drama, but it’s easy to infer both more and less than the writer intended. Ossie Gladstone is one of a group of youths, both black and white, who are present at the bus-stop stabbing incident. He is caught because he is no athlete, and by a long way the slowest to make his escape. Is it fanciful to suggest that this is a tongue-in-cheek riposte to racial stereotyping?

Rumpole observes ruefully that: “If the judge turns out to be a Jamaican teenager with form we might have a chance.” But Ossie, who isn’t quite as cocksure as he would at first lead us to believe, does finally plead not guilty and win his freedom. Rumpole’s ultimate victory reveals his strange genius for uncovering truths which turn the cases on their head. He twigs that Ossie Gladstone is illiterate (adult literacy was not a subject that was aired much then, the BBC’s landmark On the Move programme first appeared the following year) and could not therefore have read out the confession he is supposed to have made. This was to be a recurring Rumpole storyline about defendants – an embarrassing revelation apparently causes them greater distress than the prospect of a spell inside.

There were also plenty of opportunities for sardonic observations about the legal process, “everything,” as Leonard Buckley said, “from the nature of juries to the foibles of the Bench. We saw the horse-trading between counsel. We entertained grave suspicions about the police. We had the lot.” We also saw that “the heart inside [Mortimer’s] florid Rumpole was beating in the right place”.4 He is a man, in other words, essential to preservation of the ‘Golden Thread’ of British justice. Guilt must be proved beyond any reasonable doubt.

The origins of Rumpole go back to Infidelity Took Place, a Wednesday Play in 1968 about the new divorce laws. In that story, the defence lawyer is played by John Nettleton, “his waistcoat bearing crumbs of pork pie, was an early prototype for Rumpole”5, one difference being that he was “mother-ridden rather than wife-ridden”.6

Perhaps that early, dry run helped focus Mortimer’s thoughts on the sort of enduring character that he wanted to create. Seven years later, Rumpole hit the ground running. From the off, he was a character whose strengths in the courtroom appear to owe as much to instinct as intellect. Indeed, Rumpole admits as much himself, putting down to instinct his decision to pin down Detective Inspector Arthur (Edwin Brown) over the nature of Gladstone’s confession.

However, in his book of essays Where There’s a Will, Mortimer tells us that Rumpole is also playing to one of the essential strong points of any good attorney: he is a good listener. Mortimer believed that “The world’s full of talkers, with not nearly enough listeners” and said: “You may think of Rumpole’s life as one of incessant chatter, forever up on his hind legs making speeches or asking questions. Yet a good half of a barrister’s life is spent listening in silence in his chamber rooms or during a prison visit.”7

For most people Leo McKern is every bit as much Rumpole as, say, George Cole is Arthur Daley. It is hard to envisage the series having ultimately taken off with a lesser actor or performance. For Leonard Buckley, McKern’s was “the performance of a lifetime”.8 McKern had been proposed for the part by the director John Gorrie. Mortimer’s first choice, Alastair Sim, was dead and another favourite, Michael Hordern, missed out on two counts: unavailable and, in any case, too thin.9 McKern was only 55, but looked much older “with the face of a battered old prize fighter”. Mortimer, who had met McKern in the 1960s, appreciated his “Australian’s atavistic disdain for authority, so Rumpole’s dislike of pomp came naturally.10 Irene Shubik, the play’s producer, said: “It was Rumpole’s character and John’s satirical analysis through him, of the law itself, and those who live off it and those who break it, which were the strengths of the script.”11

Shubik sensed that they were on to a winner12, although the BBC did not bite. The Corporation was going through one of its regular financial crises and when it became clear that long delays were inevitable before a series would see the light of day, Shubik suggested taking it to Thames.13 The idea of working for a commercial channel with better pay appealed to Mortimer.14 Even then, the project could have foundered without McKern’s enthusiasm. The actor said that it was the first time he had played a character who he’d be happy to play again.15

The first episode also brought in Rumpole’s only offspring, Nicholas (David Yelland) who was leaving for a new life as an academic in Florida. A pub meeting of father and son, during the Ossie Gladstone case, provided an opportunity for some soul-searching and the play ended with Rumpole close to an existential crisis as he asks himself: “Who am I exactly?” To Shubik, this melancholic self-analysis was typical Rumpole16 although it does seem excessively bleak compared with what followed in the Thames’ years (the first series started in 1978). She also views the Joyce Heron version of She Who Must Be obeyed as “a tougher and more raddled character than the subsequent feather-brained Hilda played by Peggy Thorpe Bates”.17 She’s a bit of a soak, too, her speech slightly slurred as she observed that her half-bottle of mother’s ruin is empty. “What happened to the gin?”

The credits roll in virtual silence. Rumpole looks at some papers and mutters to himself, presumably regarding his next case. Mrs Rumpole mashes some potatoes. Both are dressed in beige. Even the fridge is beige. The camera explores their ghastly flat, with its washed-out green and grey décor. It is a very downbeat ending for a programme which is now remembered so fondly as amusing and light drama.

Perhaps that didn’t encourage anyone at the BBC to really buy into Shubik’s enthusiasm for Rumpole. The play wasn’t previewed in the Radio Times of that week, and the same goes for The Listener, the corporation’s weekly magazine, which also failed to review Rumpole of the Bailey in the following issue. 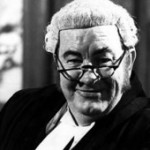 For all that, Rumpole of the Bailey required very little fine-tuning at Thames. The template had been created for a character who, like Sherlock, William and Bertie, will be with us 100 years from now.