Cox had originally planned to become an actor. He enjoyed acting at school and featured in several student theatre productions while studying English Literature at Leeds University in the early 1960s. Although he found his interests shifting towards directing and film criticism during his studies, when he graduated in July 1962 and returned to his parents’ London home, he had, he later reported, “no clear idea of what to do for a living, other than a vague desire to be an actor”.1 Cox applied to the Royal Academy of Dramatic Art and did what he recalled as “a rather sad audition”.2 RADA did not find in his favour. He later suggested this was fortunate “because, being so enormously tall – I’m six-foot five – I would never have got work as an actor. Well, at least that’s my excuse for what is, basically, lack of acting ability!”3

Instead, Cox took over a job from a friend as a temporary filing clerk in the film vaults of the BBC’s Ealing studios. From there he transitioned into a holiday relief position as a Floor Assistant at the BBC’s Television Centre. He worked on a variety of programmes across many genres, including drama (hit detective series Maigret), light entertainment (The Black and White Minstrel Show) and current affairs (Tonight).

At this time the BBC broadcast only one television channel. But that was about to change and in 1963 the BBC launched a recruitment drive to staff BBC2, due to debut the next year. Cox applied to be a Floor Manager but was unsuccessful, being told he lacked the age and experience to handle such a responsible position. He was streamed instead to the directors’ course, after passing several interview boards.4

Upon graduating the short training course, Cox continued as a Floor Assistant while gaining practical directing experience on less challenging programmes. In an interview in 1982, he recalled his work on Star Story, in which Brian Blessed read an Alan Sillitoe story to an audience of children: “I was so shy that when the credits rolled over the screen, I averted my eyes modestly as my name came up for the first time as a director, and failed to notice that it was misspelled. So my first ever screen credit was as Frank Fox! Too late, it was recorded as such, and went out on transmission so!”5 Later in his career he named his own company Fox Productions Ltd in reference to the blunder.

Cox soon moved on to the science fiction series Doctor Who, then in its first year, to hone his craft. He started with a 1964 adventure commonly known as The Edge of Destruction. He directed the second episode only, his colleague Richard Martin handling the first. In Doctor Who ’s earliest years it was common for a serial to be shared between two directors, often to give a rookie director the opportunity to learn alongside a more experienced colleague. Using only the regular cast and set entirely within the limited sets of the TARDIS interior, The Edge of Destruction was a suitable nursery slopes exercise for a new director. 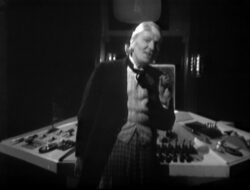 Even so, the assignment presented challenges. The series’ star, William Hartnell, was famously irascible and Cox recalled him disliking rehearsals and struggling to remember his lines. Cox later reported having been “absolutely terrified” of Hartnell and appreciating the mediation of William Russell, who played Dr Who’s companion Ian.6 “It was all a nightmare quite honestly,” Cox recalled.7 Even so, the outcome was an efficient episode of Doctor Who, with a notable sequence of a spot-lit Hartnell delivering a slightly barmy monologue on the darkened TARDIS set.

Cox soon returned to Doctor Who to direct the final two episodes of The Sensorites, a more elaborate adventure. He shadowed the series’ associate producer Mervyn Pinfield, who directed the first four episodes. The contrast must have been plain between the highly experienced, perhaps a little staid, 52-year-old Pinfield and the up-and-coming Cox, who, at 24, was the youngest member of the entire crew. On this serial Cox enjoyed his first chance at casting and deployed some of the tricks of the trade necessary given the limited resources he was working with, such as making one small set appear as different locations. Cox never returned to Doctor Who but retained fond memories of it, telling an interviewer in 1994: “It was a happy time. I don’t look back on it with anything other than pleasure.”8 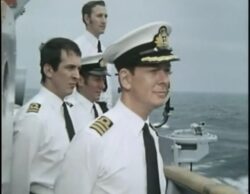 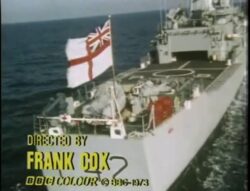 His next television directing work didn’t occur until 1967 when Cox went to BBC Scotland for two episodes of the Excise officers drama The Revenue Men. Scotland would go on to prove fertile ground for Cox’s career. He finally moved into regular directing in 1970 back in London with stints on many of the most popular drama series of the time. These included prophetic science fiction Doomwatch, navy drama Warship, detective series Paul Temple and Barlow at Large, and eight episodes of oil business drama The Troubleshooters. 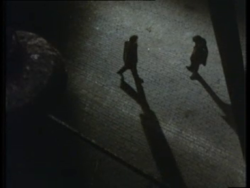 Between 1969 and 1976 Cox directed 15 episodes of police drama Softly Softly: Taskforce, a series which regularly attracted over 11 million viewers. The second of Cox’s episodes impressed The Stage and Television Today’s critic, who found his production “controlled, subtle and exciting.”9 Cox returned to Scotland to direct two episodes of the Glasgow-set private detective drama The View from Daniel Pike, screened at the beginning of 1973. 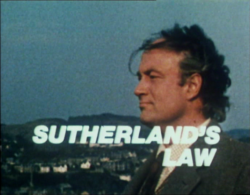 The following year Cox turned producer, taking charge of BBC Scotland’s Sutherland’s Law for its second series and overseeing the show through to its conclusion in 1976. Set in the fictional Glendoran, the series made great use of location filming in the picturesque scenery of Oban on Scotland’s west coast as it followed the investigations of a Procurator Fiscal. Sutherland’s Law was BBC Scotland’s first major networked drama series and proved a popular success across the UK.10 His initial attempt to set his stamp on the series with a new title sequence proved a frustrating experience. He was persuaded to reverse this decision after shooting the sequence by his head of department, who predicted any such change would provoke complaints from regular viewers. Cox’s other innovations were more successful. Although he didn’t cast the title role, played by Iain Cuthbertson, he made a point of giving other regular roles to Scottish actors and moved to an all-Scottish team of writers for his last two series.11 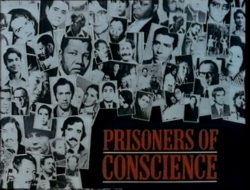 Cox went freelance in 1977 but kept on working for the BBC as a jobbing producer/director. In the late 1970s and early 1980s he produced a run of series of dramatic reconstructions of incidents from recent history: Life at Stake, Spy!, Escape and Prisoners of Conscience. These were meticulously researched and scrupulously accurate, right down to often recreating events in the exact locations that they had actually occurred (although Aberdeenshire in winter had to stand-in for the north-western wastes of Canada for an episode about a plane crash).

The Lord Lucan episode of Escape, which Cox also directed, benefited from the input of Lady Lucan until relations between her and the production team soured when she publicly criticised their casting decisions. Cox promised: “This is an unsensational telling of the story. We make no accusations, and that is true for all the episodes.” The instalment of Spy! about the case of convicted KGB agent John Vassall included homosexual themes, which was still strong stuff in 1980, and drew praise from the subject in-hiding as “very accurate”.12 In these programmes Cox mixed newsreel footage and narration with drama, underlining their documentary roots. However, his refusal to include speculation or to apply dramatic licence made them dry or superficial in some critics’ eyes.

Cox’s interest in drama-documentary continued with several one-off pieces. He directed PQ17 for Play for Today about the 1942 disaster of the eponymous Atlantic convoy and a drama about Lord Byron, both in 1981. He also tackled current events. For Panorama he produced 1982’s Two Weeks in Winter, about the imposition of martial law in Poland. The following year he directed The Campaign, which dramatised a recent shakeup of the Labour party. His series Prisoners of Conscience had previously dramatised the cases of four political prisoners, including Nelson Mandela, in 1981. 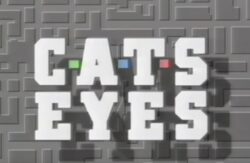 From the mid-1980s Cox took work for the various companies of the ITV network, returning to popular television drama. He directed episodes of The Brief, about a barrister involved in the courts-martial of British servicemen in Germany, for TVS in 1984, and instalments of Yorkshire Television’s Frank Windsor comedy-drama vehicle The Flying Lady in 1987. Between these assignments he co-produced for TVS the first series of CATS Eyes, a spin-off from The Gentle Touch about an all-female private detective agency. Back at the BBC, Cox directed a number of episodes of EastEnders in 1988. 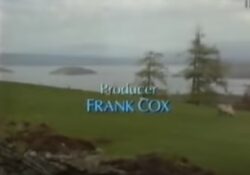 Returning to Scotland in the early-1990s, Cox directed episodes of Scottish Television’s soap opera Take the High Road before becoming its producer between 1991 and 1993. He found himself frustrated with the series’ treatment by the ITV network. Whilst it was given a regular early-evening slot in Scotland, other regions typically scheduled it in the early afternoon where it would frequently be postponed in favour of sporting fixtures.13 Again for Scottish Television, Cox took over producership of dark crime drama Taggart for one series in 1995, helping to re-establishing the series without the title character after the death of actor Mark McManus the previous year.