Jack Shepherd plays a mild-mannered bank clerk, Peplow, who goes to Great Minden on the day of its annual fair. (The adaptation was filmed in Masham, North Yorkshire.) Peplow is seeking revenge for the death of his son at the hands of a drunken lorry driver. By a coincidence that should not perhaps be examined too closely, Peplow’s former RAF colleagues both live in Great Minden. One of them, Bellenger (Ian Carmichael), is dying, the other, Ruskin (Peter Egan), is confined to a wheelchair. The fate of his former colleagues shows how the novel’s comic and tragic elements rub up against each other simultaneously. 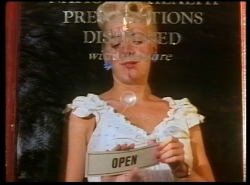 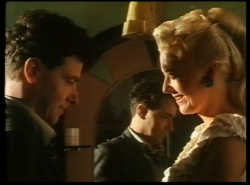 During the day, we meet a group of people whose interwoven stories will be resolved for good or ill by the time the last train departs from the town that evening. Great Minden is the sort of small town that might look superficially appealing to the outsider (from a modern perspective the small shops and lack of high street names are attractively retro) but the secrets and lies of its residents make for a poisonous place to live. As hairdresser Effie says when told that she is being watched, “That’s all people do here.” Effie is the girlfriend of probationary teacher Croser (John Sessions), as inept a man who ever stood in front of a class of small schoolchildren, but a catch as far as Effie is concerned. Effie, who refers to the folk who have breezed into town for the fair as “riff raff”, is in some ways a coarser version of Ingrid who ensnares Vic in Stan Barstow’s novel A Kind of Loving. Effie likes tittle-tattle and is both watcher and watched. Before the day is out, Croser will have to choose between her and the vicar’s unhappy and uninhibited wife. We somehow know that when the time comes Croser will jump the wrong way. 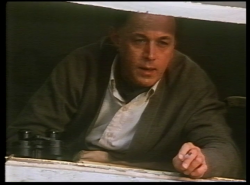 Ruskin is one of the observers Effie speaks of; as Ruskin sits by his window, nothing eludes his cynical, waspish gaze. Taking up and quoting producer Keith Richardson’s neat observation that the drama is “part-Western and part Under Milk Wood”, Times critic Peter Waymark observed that the revenge-seeking Peplow is “doing what a man’s gotta do”. However, he adds, Under Milk Wood “takes over” via Ruskin as he “surveys the town voyeuristically from a wheelchair, rather like James Stewart in Rear Window”.3 It’s a reference which Plater, a keen cinephile, might well have expected the film-literate viewer to pick up. The drama is full of small, telling details; most chillingly perhaps the sign at the fair saying: ‘All children must be paid for’. Initially, Plater was not certain about the casting of Egan as Ruskin, finding him “too nice to be cuddling all that bitterness and rage”. The screenwriter was won over: “On second viewing I’ve shifted my ground – he becomes the sane centre of all this creeping corruption”.4 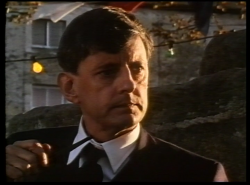 There’s an excellent performance from Jack Shepherd as Peplow. His is a very buttoned-up kind of torment; he’s a man who isn’t going to give away much about himself. As a war-time adjutant (this is something Bellenger and Ruskin have good reason to recall), he always knew what was going on and how to deal quietly with problems. Ruskin describes him as a man “with a filing cabinet of a head”. Not a leader of men, then, but doubtless a good bank clerk, discreet and competent, and not short of self-knowledge. As his train arrives in Great Minden he examines himself in the carriage mirror and, reflecting on the contrast between his mild exterior and the gruesome nature of the task in hand says to himself: “Mr Blot, the bank clerk. Snap!” He can be droll, too. When Ruskin asks what brings him to town (“Checking up on a bloke before you forestall on his mortgage?”) Peplow responds, deadpan, “That sort of thing.” It’s a performance that impressed Plater, who observed: “Truth is, Jack gives such a marvellous, haunted performance, we don’t need to see what it is that haunts him. We know we’ll find out in time.”5 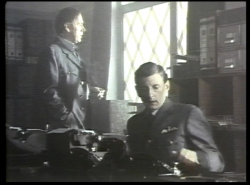 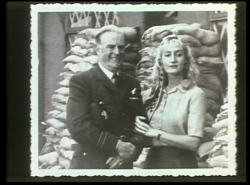 A Day in Summer was made a couple of years after director Pat O’Connor’s cinema version of J.L. Carr’s later and best-known novel, A Month in the Country.6 Although published 16 years apart, there are enough parallels between the two stories to suggest that Carr’s use of similar titles was a way of encouraging readers to look for overlaps. A Month in the Country (screenplay by Simon Gray) also begins with the arrival of a major character, carrying serious emotional baggage, by train. The biggest conflicts of the twentieth century loom large over both stories, with men troubled by what they did during their war or what it did to them. The dying Bellenger has a young son, the result of a war-time liaison, and who will soon be an orphan with an uncertain future. Ruskin lost both his legs. In A Month in the Country, Tom Birkin (Colin Firth) and James Moon (Kenneth Branagh) have been traumatised a generation earlier by their experiences in the trenches. For Birkin (more than 20 years before Firth was George VI in The King’s Speech) one consequence is a dreadful stammer which becomes less marked as he works on uncovering the fresco in the village church. 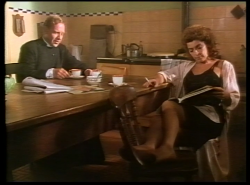 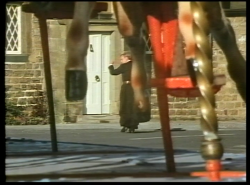 J.L. Carr was a Methodist and the established church never gets much of a write-up. Both Day and Month feature cold-fish, mean-spirited vicars. By contrast, the warm-hearted non-comformist preacher in A Month in the Country (played by Jim Carter) is a putting-on-an-act hell fire preacher; the kind who offers his healthy-sized congregation a good-natured chastisement which they are happy to submit to.

I met Carr at his home in Kettering in 1993, the year before he died. He used a musical term to describe his approach to A Day in Summer. “I was going for a contrapuntal style, something I never tried again.”7 That provides some challenges for a screen writer and Carr was impressed by Plater’s script. “Alan has got it right,” he wrote in an undated note. “Very impressed! With at least seven stories going on, it cannot have been easy for him. The right direction will make it into a memorable film”.8 The admiration was mutual: when Plater complimented the “terrific performances” – including those of Peplow, Croser, Miss Prosser, the Rector, Georgina and Mrs Loatley – he felt this “must prove something about Jim Carr – sure as Hell, it’s nothing to do with me”.9 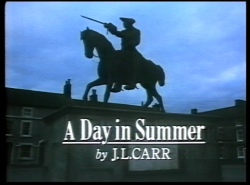 In attempting to convey Carr’s work on screen, Alan Plater has some built-in advantages. The novel is just over 200 pages in length, so has few compression issues. One or two minor characters are omitted but it is a faithful adaptation. A novel of modest length with old-fashioned virtues of well-developed characters and strong storylines is a good starting point for a two-hour television or cinema adaptation. It’s often said that great literature makes for bad films and that mediocre books work better on the screen. There’s an occasional truth in the observation although plenty of literary masterpieces are treated reverentially and effectively, while lousy novels often make for lousy cinema. Any number of reasons apply for the difficulties in the transition from page to screen; the languages of film and literature are not always complementary. How, for example, to find a visual equivalent of fine descriptive writing or (other than via long, non-cinematic voiceovers) interior monologues? How to recreate the tone of the original? Even the greater length allowed by television can lead to problems. ITV’s Brideshead Revisited, adapted by John Mortimer, ran for a whopping 11 hours.10 While everything in the book was included, nothing was excluded. In the novel, the weary Lord Marchmain returns after many years away. Stepping inside Brideshead, he immediately goes to a “little heraldic chair […] on which no one, not even a weary footman, had sat since it was made; there Lord Marchman sat and wiped his eyes”.11 Having just read Brideshead, I found myself shouting at the screen: “He’ll sit in that little chair”; and so he did.

Yorkshire Television’s adaptation of A Day in Summer is a more spartan affair than O’Connor’s A Month in the Country, made two years earlier with much higher production values. Month looks beautiful and the film’s gentle pace reflects that of the novel, which Carr considered to be the moment when his commercial instinct served him best. He said: “Most people like reading about the past, life seemed more leisurely before the motor car age. They like a love story without too much sex – in any case people of my generation are very reticent about sex.”12 A Month in the Country is also the book that Carr felt most likely to survive (“after all, it’s an examination book now, people are having to read it”) but felt that otherwise his desire to please counted against him.13

Perhaps posterity will prove him to be wrong. In The Ordeal of Gilbert Pinfold, Evelyn Waugh offers a summary of his protagonist’s literary credentials, while of course describing himself. Pinfold’s writing, he says, might be seen in 100 years’ time as typical of a generation of novelists “notable for elegance and variety of contrivance”.14 That could well serve as a summary of Carr’s eight novels. He told me that he saw writing as a craft; the novelist had to take account of what publisher and public want. And he felt that this, together with his publication of several books which were quite different from one another, had affected his reputation: “If you really want to make a big reputation as a writer you need to keep on working in the same genre. If you chop and change, as I’ve done, you’ll lose readers as well as gain them,” he said.15 However, in a couple of generations’ time, when we’ve tired of some of the more meretricious contemporary heavyweights, Carr’s A Day in Summer, might still be with us, alongside A Month in the Country. And Alan Plater certainly did him justice in this television film.

It’s interesting to note, incidentally, reading the Peter Waymark review, that there is nothing new about concerns over the decline of single-episode television dramas. He argued that A Day in Summer “is an affirmation that one-off drama is alive and well on the ITV network and can still be made without the compromises imposed by co-production”.16

With thanks to Hull History Centre (in particular Simon Wilson) and Simon Coward.