‘Why can’t people accept evil when they are offered it?’ 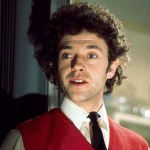 Brimstone & Treacle is probably one of Dennis Potter’s most well-known titles, not least because of the ban it received directly before its originally scheduled transmission date of 6 April 1976. It took a full eleven years, with different BBC executives, before the play was finally broadcast for the first time.

Written as part of an informal trilogy, Brimstone & Treacle was intended to be viewed alongside two other Potter plays that also challenged aspects of spirituality and explored conventional ways of thinking, Double Dare and Where Adam Stood. Instead, as John R. Cook notes in his book, ‘having been commissioned and recorded by the BBC it was “pulled” from the schedules on the orders of Alasdair Milne, then Director of TV Programmes within the Corporation’1.  Read more... (2561 words, 5 images)