In all the myriad apocalypse dramas produced in the UK, what matters most is where the bomb drops. The drip-drip of radio bulletins in the suburban daily lives of Threads cut straight to the contemporary fear of nuclear war, and the 1984 film’s unfussy depiction of local authority admin echoes the staccato, functional, inevitable nature of Peter Watkins’ The War Game. As a narrative device the anticipation of Armageddon can create real tension, the strike clearing away characters in a single bound and providing a fundamental gear change in a long storyline. After which it’s either about the journey back or, more likely, an acceptance of the new order.

The Old Men at the Zoo, a 1983 serial for BBC2 based on the novel by Angus Wilson, leaves the flashpoint unfashionably late. Although the threat of war is ever present the focus is very much on preparation, propaganda and domestic politics. Curiously, and rather more indicative of the age in which it was adapted, the nuclear bomb that arrives four fifths of the way through was not even present in the novel.  Read more... (1482 words, 1 image) 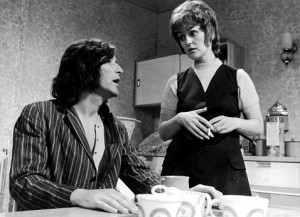