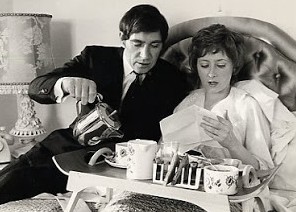 There has been much talk recently about contemporary television producing drama superior to anything that the cinema currently has to offer. Any vestiges of snobbery about the supposed inferiority of the small screen have been snuffed out with directors such as Martin Scorsese and David Fincher choosing to work in television. Jane Campion, the New Zealander who directed An Angel at my Table and The Piano, said in an interview for The Times that TV is now producing the more pioneering work. Campion, who has directed a six-part crime thriller for television which was launched at Sundance and received its European premiere at the Berlin Film Festival, said after seeing HBO’s Deadwood: ‘Who is commissioning this stuff? This is a revolution, something is really happening in television.’1 It does not follow of course that revolutionary film directors will have a big impact (Scorsese’s Boardwalk Empire had mixed reviews) when they transfer their attentions to TV.

Ingmar Bergman’s first British television play The Lie is a historically interesting but modest piece of work. Historically interesting because of the play’s genesis: it was commissioned by the Swedish Broadcasting Corporation on behalf of European members participating in ‘The Largest Theatre in the World’. This, the Radio Times explained, was ‘a project which enabled a play to be broadcast simultaneously in several languages across Europe.’2 The UK Play For Today version was directed by Alan Bridges; an American version was put out on CBS, directed by Alex Segal.3

The play looks at the cool and brittle relationship between a successful architect (Frank Finlay) and his academic wife (Gemma Jones). This couple, Andrew and Anna, live in a swish, modern apartment which still looks stylish (albeit with the ubiquitous 1970s brown and beige tones familiar to fans of The Sweeney and Life on Mars) more than forty years on. Stanley Reynolds, reviewing the play in The Times, said: ‘The production itself was very slick; one felt at times as if one was seeing the drama behind the lives of the people in the After Eight mint commercial.’4

All is not well, however, among these Metropolitan types. Andrew goes into his office to learn that a major government-funded project on which he has worked for months, will not be entrusted to him after all. Younger men are likely to take on the role and Andrew is suddenly feeling, at forty, a bit old. The news is broken to him in an extremely polite but curiously detached exchange with the company’s head, George (John Nettleton). Throughout the conversation, George scarcely looks Andrew in the face, setting the tone for the rest of the play, and for the theme of lack of communication and connection among the characters.

Anna’s strongest point of connection appears to be with her much older, mentally-ill brother Albert (Joss Ackland) who she visits in hospital and with whom she has an understanding relationship. Albert is a troubled man, wearing make-up and full of camp gestures. We are almost certainly being told that he is gay and, perhaps, tormented by his nature. At this point homosexuality, in private among consenting men who have reached 21 years of age, had been legal in the UK for only three years. In a bleak and typically Bergmanesque moment, Albert observes: ‘Do you think I can’t see the approaching twilight?’ By contrast, Andrew and Anna are distant from one another. Andrew complains to nurse Esther (Caroline Blakiston), with whom he later has a brief dalliance, that: ‘We don’t touch each other.’ There’s also something of the cold fish in Anna the mother, tucking up her little son in bed at the end of the day without a goodnight kiss. 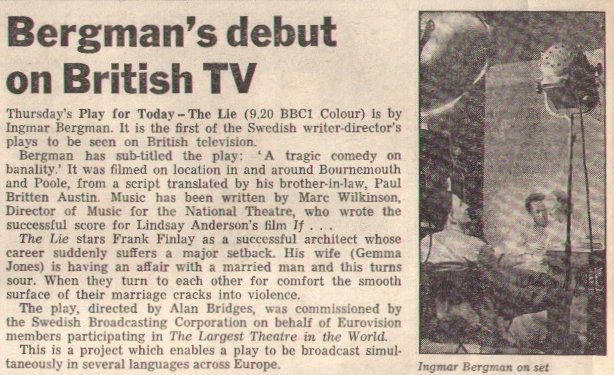 This is a drama in which nothing much happens (Bergman has subtitled it “a tragic comedy on banality”5 ) during the first hour. As Reynolds says, it sets up “the lack of any real point of contact in the characters’ lives”.6 However, with everyone so buttoned-up, it is no surprise when, amid an ever-present mood of tension, violence finally breaks out; Andrew, who had admitted to a one-evening stand, beats up Anna when he learns of her long-running adulterous affair. It is the only moment of real passion in the play, despite a scene which makes it clear that Andrew and Anna still have a spontaneous sex life. Anna’s relationship with her lover Ellis (John Carson) is pictured as being more like a marriage than an affair. There are two references to the couple having lived together for eight years.

No one would dispute that Bergman is one of the most revolutionary figures in the history of cinema but Play for Today viewers unfamiliar with his name would have seen nothing here to pique their curiosity. Reynolds suggests that the great Swede would appear to be ‘coming a little late into a field which has already been more effectively tilled by such men as Harold Pinter and David Mercer.’7 He qualifies this a little: ‘This may be seen as a direct tribute to the quality of drama output on BBC television over the past five years rather than a slam at Bergman.’8

Nevertheless, The Lie was an unremarkable piece of work, which did nothing to challenge viewers. Reynolds’ observations about Bergman arriving late on the scene find an interesting reflection in Alan Bennett’s television-related views about Lindsay Anderson. Bennett, while an admirer of Anderson in many ways, felt that the director’s work could often be unsubtle and even crude. He says that ‘so much of Britannia Hospital [the 1983 film which used the hospital as metaphor for the nation’s decadence and demise] for instance, just isn’t funny.’9

And the reason, for Bennett, lies with good television. ‘One reason Lindsay persistently underestimated the sophistication of his audience was that he didn’t watch much television.’10 He failed to understand, therefore, that there was ‘a regular diet of not always mild subversion and social criticism that was still the staple of television drama.’ People were ‘not easy to shock as Lindsay wanted to shock them’ and he was saying nothing new with the film. Admittedly, the British delegation walked out on Britannia Hospital when it was shown at Cannes during the Falklands War, but Bennett says: ‘Quite over what would be hard to say.’11 Anderson, like Bergman with The Lie, was venturing into territory that held no great revelations for regular viewers of sophisticated British television drama. 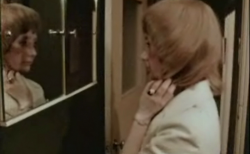 Nevertheless, there were plenty of incidental pleasures along the way and one of them lay in the powerful performances. The play might have had the occasional look of a chocolate-covered mints advertisement but there was nothing remotely After Eight about Jones and Finlay who helped to give the play what Reynolds felt was ‘a haunted psychological, almost religious truth and conviction’.12 Jones, as Anna, is a strange piece of work. Like her husband she is a high-flier. A grant she has received for some unspecified research is significant enough to have made the newspapers. Her lack of warmth is accompanied by a dedicated narcissism which leaves her unable to walk past a mirror without stopping to examine herself closely. She has an impressive wig, a much more common accessory in those days among the young and beautiful. It is in a fashionable late 1960s’ style albeit verging on what the Americans would call ‘major hair’. Anna always wears this when going out, but she has removed it when visited by her hard, truculent father (Andrew Dignam), a man unlikely to have given Anna and Albert a happy childhood; this man probably disapprove of the vanity of wig-wearing, and one shudders to think what he would make of a son who paints his face.

Later, during a moment of confrontation between Andrew and Anna, we see the husband looking at his wife in a mirror, while in front of her the wig rests on its stand. It is almost as if he doesn’t know which one is his real wife, and where her real personality lies.

In the end it would appear that only lies have kept them together. At a dinner party, Andrew is sitting next to Eva (Jennifer Daniel) the highly-strung wife of Anna’s lover. The self-deceiving Andrew says how much he loves his wife before we cut, inevitably, to Anna and Ellis sitting together comfortably. Nobody has the slightest suspicion that they are lovers and Anna’s ‘two marriages’ could clearly have gone on forever. The fact that things will now change is only the result of the revelations towards the end of the play. As Anna says to Andrew: ‘I don’t want your honesty.’

For Bergman biographer Peter Cowie, The Lie examined “the umbilical cord that binds the married couple.”13 It also revisits a Bergman theme of the man being more easily ‘undermined’ than the woman: ‘He is the one who cracks first under the searching relentless onslaught of his partner…’14 This is what you would expect, when you reflect on her cool demeanour and contrast it with Andrew’s crumpled reaction to the news about his lost architectural project. It is only lies that have held them together. Their relationship cannot stand the truth.