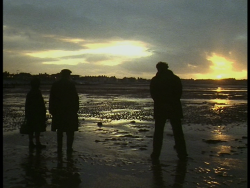 Sunset Across the Bay follows a retired couple who move from Leeds to the seaside resort of Morecambe. Their struggle to adapt to retirement produces humour through the observation of Northern dialogue and idiosyncrasies, but moves towards tragedy.1 One of many impressive collaborations between writer Alan Bennett and director Stephen Frears, the play combines understated emotional power and a sense of the social impact of urban planning with a skilful deployment of technique that builds mood, character and theme.

The play (if not the published script) opens with Mrs Liversidge’s spiritedly inept performance of Ivor Novello’s We’ll Gather Lilacs in the Spring Again.2 Its heightened, ‘florid’ delivery is so different from Mam and Dad’s prosaic understatement that it has been called an ‘ironic prologue’.3 However, the song’s lyrics anticipate key moments (‘never leave me’… ‘when you come home once more’), create a relevant sense of moving on by looking backwards (gathering lilacs ‘again’) and foreshadow Mam’s moment of articulacy in the Lake District later, when she performs a poem featuring daffodils.  Read more... (3788 words, 7 images)