“They should have known that they had a way out, but being mere birds, didn’t.” 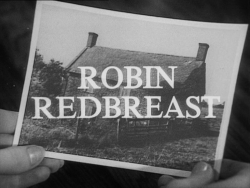 Robin Redbreast has not been repeated since 1971, and yet is often recalled by viewers of the time, probably because of its eerie atmosphere, and particularly for its horrifying and surreal finale. Indeed, the play has had such a strong impact on those who have seen it, that it is almost seen as an “event” play – a work that came out of the blue, singular in approach and subject matter, and mysterious in genesis. It is because of this, perhaps, that the very limited amount of critical writing on the play has tended to be of the “remember that…what was all that about?” school of criticism. In fact its writer, John Bowen, has well over 50 plays, screenplays and novels to his credit, and Robin Redbreast is just one of many pieces he created that draw from his thematic interest in ancient myths and the way they live on in modern culture. Although Robin Redbreast is a good example of the thriller genre, Bowen was a very (some would say overly) serious writer, and he stressed the importance of ideas in his work: “A play is ideas expressed in incident…a play works first on emotions, but emotion unanchored by thought simply washes about the place in a thoroughly self-indulgent way…”1 The ideas in Robin Redbreast are not obvious at first, but when the play is viewed in the context of Bowen’s other work it becomes less opaque. It is also significant that the play represents the best synthesis of Bowen’s predominant ideas, and seems to have had an impact on the development of his subsequent career.  Read more... (2838 words, 10 images)