“I have a great fondness for the past, the way things were.” 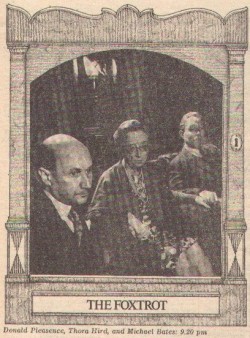 The Foxtrot offers further proof of the wide variety of approaches and subject matter in Play for Today: a self-aware sex comedy about a ménage-a-trois between Michael Bates, Donald Pleasence and Thora Hird is far removed from the intensity and political commitment of plays from the same period such as When the Bough Breaks and The Rank and File. However, newspaper reviews were mixed – stressing its strengths and weaknesses, praising some elements and criticising what some saw as its self-awareness and obscurity. Given that some reviewers used The Foxtrot to question the very purpose of Play for Today as a strand, the following essay uses newspaper reviews of The Foxtrot – depending more heavily on reviews than the site’s essays usually do – in order to trace some of the ways in which Play for Today was a contested space.1  Read more... (2703 words, 2 images)

In contrast to a lot of the heavier entries in Play for Today, Evelyn is a bit of a volte face, especially given its transmission just one week after that of Jeremy Sandford’s cause celebre Edna the Inebriate Woman. Produced in much the same whimsical vein as writer Rhys Adrian’s previous Play for Today script (The Foxtrot), it arguably provided a neat counterpoint to the more po-faced ‘serious’ plays on offer throughout the rest of 1971’s run. Starting life as a radio play, winning author Rhys Adrian the Prix Italia in 19701, it is – at its most basic – almost exclusively a series of dialogues. While this displays all the hallmarks of a potentially stultifying ‘art’ film (setting one’s early warning system twitching like a pair of clackers) it is, in fact, quite a clever little script and can lay claim to (mostly) excellent performances and sympathetic and unobtrusive direction. This is also one of those Play for Todays that, despite being repeated twice, is little remembered. It does not slaughter sacred cows or storm barns and it is neither revolutionary nor a catalyst for a kneekjerk bout of social outrage from publicity-seeking backbench MPs. It is quite simply a gentle ‘situation comedy’, centered around a forty year-old man’s extra-marital affair and, as such, would never be given the chance of even a footnote in any serious research of the single play. By ‘situation comedy’ I, of course, mean that any amusement value is derived purely through the characters and their situation and not that it is part of the ‘Sorry I didn’t hear you Vicar – my knockers must need a good seeing to’ school of comedy…  Read more... (2673 words, 1 image)