A literary costume drama set around the courts of Richard I and Saladin, The Crusade (1965) is an example of how important non-science-fiction historical stories were in the early years of Doctor Who. This essay looks at how The Crusade approaches history, in particular the characterisation of Richard I (“the Lionheart”). There will be attention paid to the programme’s attempts at historical accuracy, although that shouldn’t be our only focus because the historical study of popular culture too often ignores the specific qualities of popular culture (and also history) by depending on the accuracy question. Depictions of Richard I change for various reasons including historians’ debates, school curricula, changes in media institutions, shifting dramatic styles and reactions to previous dramas. These explain why Richard the Lionheart (ITV, 1961-65) uses Richard differently from Richard Lester’s film Robin and Marian (1976), which is in turn different from the series Robin of Sherwood (ITV, 1984-86) and Robin Hood (BBC, 2006-2009). This essay will therefore take Doctor Who’s version of Richard I as a starting point to think about how history and screen fictions build narratives around figures like Richard I. I’m drawing from unused sections of the research I conducted for a forthcoming academic publication on neo-medievalism,1 but any references to academic theory will be rooted in discussion of the choices made by writer David Whitaker and director Douglas Camfield.  Read more... (6290 words, 11 images)

For me, Doctor Who literally is a fairy tale. It’s not really science fiction. It’s not set in space, it’s set under your bed. – Steven Moffat1

If you look at the stories I’ve written so far I suppose I might be slightly more at the fairy-tale and Tim Burton end of Doctor Who, whereas Russell is probably more at the blockbuster and Superman end of the show. – Steven Moffat2

Here are a few thoughts on the ideas at work in The Eleventh Hour, the first episode of the 2010 season of Doctor Who. It’s not a straight ‘review’, because there are enough of those on the internet already. But it’s also not the type of researched essay you expect from this site, because I’m interested in the episode’s ambiguities and the thoughts circulating in my head after seeing it, and don’t want to re-watch the episode to death or wait until the end of the season when some of those ideas will have been resolved. This piece will discuss the ideas relating to the ‘storybook quality’ that new lead writer Steven Moffat has talked about3, think about how style and imagery support characterisation and theme, and work out why my mind has made associations with the classic Michael Powell and Emeric Pressburger film A Matter of Life and Death (1946). This piece contains spoilers, and, unlike other essays on this site, you will need to have seen the episode to know what I’m talking about.  Read more... (4529 words, 11 images) 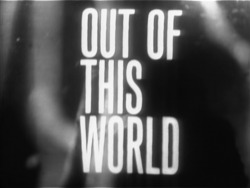 There are many reasons why a television series may languish in obscurity, perhaps primarily because it simply does not merit any interest. However, this is not the case with ABC’s 1962 series Out of This World – British television’s first science fiction anthology – which suffers obscurity due to two factors independent of the programme itself. Only one episode exists in full, leaving little scope for re-evaluation, and the series has long been overshadowed by its celebrated longer-running BBC cousin Out of the Unknown. However, Out of This World is not just worthy of attention as a curiosity, but as an original and successful series in its own right.  Read more... (4877 words, 10 images)