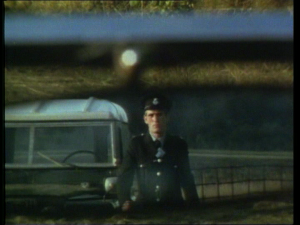 As a festive, er, ‘treat’, here’s a much more facetious piece than this site usually runs, a DVD review (of Parkin’s Patch: The Complete Series), which apart from some revisions is reproduced from the excellent (but at this moment on hiatus) Tachyon TV website… There’s a moment in the episode ‘Lock, Stock and…’ when a character starts an alibi with “I took the whippet out”. This made me think two things: “until it has a Yorkshire edition, the CSI franchise is merely treading water” and “Parkin’s Patch is pretty much what I expected.” So, should you expect 26 half-hours of charming yet undemanding early evening telly with a local bobby investigating quirky and/or spiky Yorkshire folk? ‘Appen. And ‘appen not. There are some predictable, even ramshackle, moments, but there are also some lovely surprises that make Parkin’s Patch a bit of a treat.

The whole premise mixes the new with the familiar. It’s one of new-fangled Yorkshire Television’s earliest drama series, and it reflects the ‘Unit Beat System’ that had been accelerating since 1967.1 The series’ credited police advisor, Detective Chief Superintendent Arnold Robinson, was Head of the combined Sheffield and Rotherham Force which had been involved in the discussions from which that system emerged.2 Moss Parkin (John Flanagan) is typical of that system: he’s integral to the local community, working from his combined office-and-home, helped by his wife Beth (Heather Page). The tone of benevolent coppering inevitably borders on Dixon of Dock Green (ITV London scheduled it immediately before Dixon’s BBC1 slot).3 Parkin patrols Fickley (only a criticism if given Estuary pronounciation). This is his “patch”: sad to relate, but the series isn’t a harrowing insight into an ITN newsreader’s battle with addiction. Two other regulars help Moss. Beth’s character development covers the whole spectrum, from cooking Moss’s tea while wearing a dress to cooking Moss’s tea while wearing trousers. (Rare exceptions include ‘Nothing Personal’, about an attack on the Moss home.) The visiting results-hungry cynical detective Ron Radley (Gareth Thomas) regularly attends upon Moss’s neglected wife, inviting expectations of sexual tension which, sadly for Ron, are never quite fulfilled. His tragedy is perhaps best expressed by Beth’s comment to Moss in ‘Fame of a Kind’, that “I’ve an apple fool Ron Radley didn’t get a whiff of”. 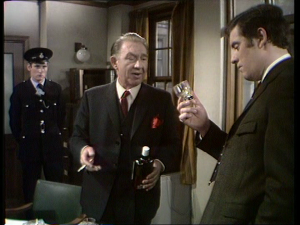 But, like Dixon (which ran into the Sweeney period with its own CID world of blags and shooters), the series isn’t always as fluffy as its reputation. Moss is suspended for alleged malpractice (‘Regulation 17’), is capable of righteous anger – ‘Wise Men’ concludes with a towering one-word snarl – and a passing villain in ‘The Spider’s Web’ gives his verdict on the format: “Lovely sight, int it. Copper being nice and helpful to little ‘uns. Shall I run over him?” Indeed, the series uses several Z Cars and Softly Softly alumni: it was devised by Elwyn Jones and its writers include Robert Barr (who had devised the earlier Yorkshire series Gazette, which spawned Hadleigh), Allan Prior, James Doran and Troy Kennedy Martin, writing under the pseudonym ‘Tony Marsh’ as on the seemingly tonally similar Weavers Green.4 Despite Ian Kennedy Martin’s presence it doesn’t quite bridge Dixon and The Sweeney, though Radley sometimes clashes with Moss’s seeming leniency. Gareth Thomas has the look of a man prepared to roll over a bonnet and fetch an errant child a livener up the bracket. Struggling with promotion exams, he favours gut instinct over new-fangled methods (in ‘The Spider’s Web’ his old-fangled ways are challenged by that representative of modernity, David Daker), is not averse to taking down a female witness’s particulars and has the vital ability to drink pints while wearing outdoor coats indoors. But Thomas’s twinkling eye belies Radley’s occasional zealousness and breaks through Moss’s earnestness (a self-effacing lead performance by John Flanagan, whose capacity for winning charm can be seen in Alan Plater’s Land of Green Ginger and who of course had a regular role alongside Carter and Regan in The Sweeney).

The episodes vary in quality and ambition. There are early wobbles, as in the fluffs and visible movement behind the set that suggest that ‘Dead? Or Alive?’ may not come top of Mike Newell’s CV. The BBFC’s 12 certificate is partly because of “discriminatory references”, most of which can be found in ‘Fame of a Kind’, although the offending character’s attempt to attribute racist opinions to his dog might have presented procedural problems for Radley’s desire to “report him to the Race Relations Board”. The character is challenged by Beth, although anyone expecting her tolerance to remain a consistent character trait should avoid holding breakables during ‘Low Noon’. 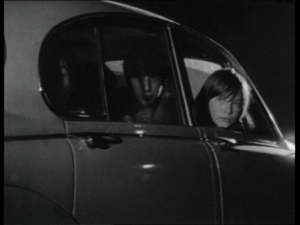 However, just when you think you’ve got the series sussed, the series throws a curve ball or, more accurately, a spurt of vomit after Moss discovers a dismembered body (I won’t spoiler the episode title). There are more surprises to come. There’s ‘The Way Home’, which starts like a Yorkshire Harold Pinter take on Big Breadwinner Hog with Michael Apted directing Ronald Lacey and David Leland. There are two superb episodes directed by Stephen (credited at one point as ‘Steven’) Frears: ‘The Deserter’, which pits Moss’s policing against army discipline, and ‘Boys’, in which movie-obsessed boys go on the run. This enchanting combination of Northern reality and noir quotation had an impact on the career of Frears, and his writer-actor friend Neville Smith, who appears in another Parkin’s Patch episode, ‘Hoof Nor Horn’. ‘Boys’ is the episode that The Times had in mind when reporting in 1971 that the film Gumshoe “sprang from an episode of Parkin’s Patch, that Frears directed in which two kids steal a Jaguar and act out bits from old movies. He showed it to a friend, Neville Smith, an actor/writer. They were both out of work and thus started to write the film together.”5 Smith told the Evening Standard in 1972 that “It all came out of a conversation with directors Maurice Hatton and Stephen Frears one night after a few drinks” in which Smith had said that “anyone can write a thriller”, to which they said “go on, you do it, then.” Smith noted that “Of course I was quite wrong. It’s a very difficult discipline to work in. It’s not easy, and anyone can’t do it.”6 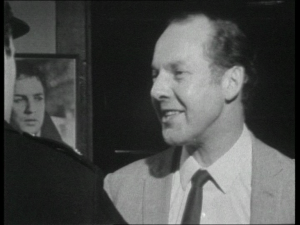 ‘The Deserter’, ‘The Way Home’ and ‘Boys’ are stylistically different from the rest of the series – these lack the usual supporting characters and usual sets, and have much more film than the combination of video studio interiors and filmed exteriors that features in most other episodes. They are also in black and white whilst the other episodes are in colour – I have yet to establish definitively whether this is because (as their stylistic and format differences would suggest, as would Frears’ stated search for filmed drama in his early television pieces) they were shot on black and white or because (as those around the DVD release wondered) colour originals may have been made but not survived.7 Either way, these are distinctive episodes, in particular ‘Boys’, which could stand as a one-off play in its own right and shares so many elements with Frears’ early pieces (from the short film The Burning (1967) to his exemplary opening episode of Follyfoot, ‘Dora’) as to tempt me into exactly the sort of auteurist placing of square pegs in round holes that I’m trying to avoid. (The brief glimpse of a magazine in ‘Boys’ also explains where the BBFC found their “brief sexualised nudity”. It transpires that Kirkby Overblow is actually a filming location and not an act.) Although not in the same league as those three episodes, Dick Sharples’ ‘Low Noon’ is another examples of a fun gear change, the only use of location video and a playfully overt homage to High Noon. 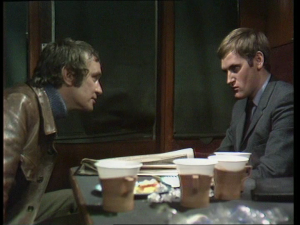 ‘Tony Marsh’ wrote ‘The Deserter’, and Ian Kennedy Martin wrote ‘Boys’, and sure enough these writers provide the series’ other standout, format-breaking episodes. There’s the Christmas special ‘The Manchester Passenger’, which I will now avoid spoilering in order to avoid impairing your inevitable cheering at the telly, and ‘The Journey’, largely a two-hander in a train carriage, in which Moss transports a villain played superbly by Tony Beckley, with his “sparkling badinage”, criticisms of the police and a conceit that should put you in mind of one of the 1990s’ most celebrated movie twists. There’s the unusual ‘Vickory’, when the area most closely resembles Royston Vasey in response to the arrival of a hip young rock star. The series ends with the delightful ‘Two Gentlemen Standing’, with Peter Sallis’s fruity visiting Special Branch cop Bob Mitchum (“there’s no connection”) and the legendary Roger Livesey’s vague aristocrat, with his Boat Race-oriented filing system. Sallis’s witty deconstruction of Moss/the show gives way to the value of local knowledge, and Sallis is won over by the strengths of the series just as we all are. These episodes illustrate script editor Nick McCarty’s statement to The Stage and Television Today during production: “It is an exciting idea compressing a story into 30 minutes; it is basically short story writing, and this is one of the most difficult forms of writing.”8 The Kennedy Martins embrace it superbly.

Beckley, Sallis and Livesey aren’t the only acting talent likely to draw archive television fans. There’s Michael Robbins (twice), Ray Smith (a vulnerable performance in ‘Bonus’), Warren Clarke, Michael Elphick, James Grout, Harry Towb, Mona Washbourne, Hilda Braid, Alan Rothwell, Glynn Edwards, Norman Jones, Del Henney and vital turns by Bill Fraser (who later appears in Doctor Who story ‘Meglos’, co-written by Flanagan), Pauline Collins and David Lodge. Fans of shouting-while-operating-a-decanter acting will derive their usual pleasure from Glyn Owen’s appearance in ‘The Link’, while there’s a cameo appearance by a Steve Pemberton Psychoville character in ‘Nothing Personal’ (okay, there isn’t, but you’ll want proof). When someone returning from agricultural college describes an ill person as a “cabbage”, at least you know they’re on the right course. Doctor Who fans (I should note here that Tachyon TV, for whom this review was written, is often, though not exclusively, focused on Who) should buy asap for William Russell’s one-scene masterclass in range and pacing (‘No Friendship for Coppers’), and Kevin Stoney’s triumphant oozing of predatory charm while running a handbag masterplan (‘Fox Among the Chickens’). Trivia fans who get out even less than I do may enjoy noting the episode in which Moss tangles with a pairing drawn from Classic Who’s first and last recorded stories.

Of course, Parkin’s Patch begat Spooner’s Patch (what kind of crazy allotment is that?), and, you might think, Heartbeat, many episodes of which were co-written by John Flanagan. However, Heartbeat was actually one of the most market-tested creations in television history.9 Whether this consisted of focus groups saying “you should remake Parkin’s Patch… ‘appen”, we can only speculate.

Originally posted: 31 December 2012
[This piece first appeared on the Tachyon TV website in April 2012. It is presented here with minor revisions, some extra material and endnotes.]